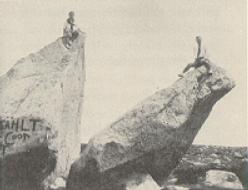 Whales Jaw, a boulder which once resembled a whale's mouth opening to the sky, has probably stood since the glaciers came across Cape Ann and split a huge boulder into large pieces. The two pieces were left by the ice fields with one standing 20 feet straight up and the other, slightly smaller, balanced at an angle. The two pieces together bore a remarkable resemblance to the fearful mighty Sperm Whale. The rugged terrain of Dogtown is a product of the late Pleistocene epoch when glaciers - some a mile thick - spilled gigantic rocks and boulders across New England. As they moved along, the massive ice floes pushed, scraped, and lifted tons of rocks. When the last of the glaciers melted, it littered these rocks along the hilly spine of Cape Ann in the neighborhood of Dogtown. In 1989, a piece of the boulder broke off but Whales Jaw still stands as it has for over ten thousand years.